No I haven’t bought a motorcycle or sports car and I haven’t been addictively buying vinyl records from my youth. I have however developed an obsession with rock climbing.

I suppose it started about a year ago when I watched “Valley Uprising” and subsequently took Evan out to the small mobile climbing wall here on the island. It then developed into listening to podcasts like “The Enormocast” and “theLedge” and watching anything on the internet about climbing. Then a local sports centre opened a climbing wall and after a couple of months of thinking about it, I bit the bullet and went along to their thursday evening climbing session.

Now I’m not the most social of creatures so the idea of spending 2 hours with strangers watching me inelegantly hauling my 15 stone self up a wall while clearly out of shape didn’t really appeal but I thought I’d give it a try.

That was in August. Now here we are at the end of November, I’ve been every week and I can’t wait for thursdays to come around. I’ve bought a harness and some sticky shoes and I LOVE it. Now, I’m not very good at it but a pattern has emerged where I’ll get stuck on a route one week and can do nothing but fall until the following the week when I’ll get up the route first time and move onto the next one to falter until a week a later but it’s coming together slowly. And as for the social aspect, well I’ve been enjoying that too, there’s a great mix of people who all climb better than me but are really encouraging and it has kind of grown into a little team, headed up by our fearless leader who pushes us just the right amount and makes sure I feel it the next morning.

I’ve kitted out the kids and Hazel and we’ve started going together on a sunday morning and this week, Hazel and I may go over while the kids are at school so I can have a cheeky practice on the routes I’m struggling with. We even had Evan’s 10th birthday party out there and in the eyes of those who came along, he is now the coolest kid at school.

So if this is a midlife crisis, I’m embracing it. Is it costing me loads in gear purchases?  Am I boring my wife to tears with it?  Am I planning visits to the kids grandparents because there just so happens to be a crag near them? Yes to all three. I just need to remember to check my knots! 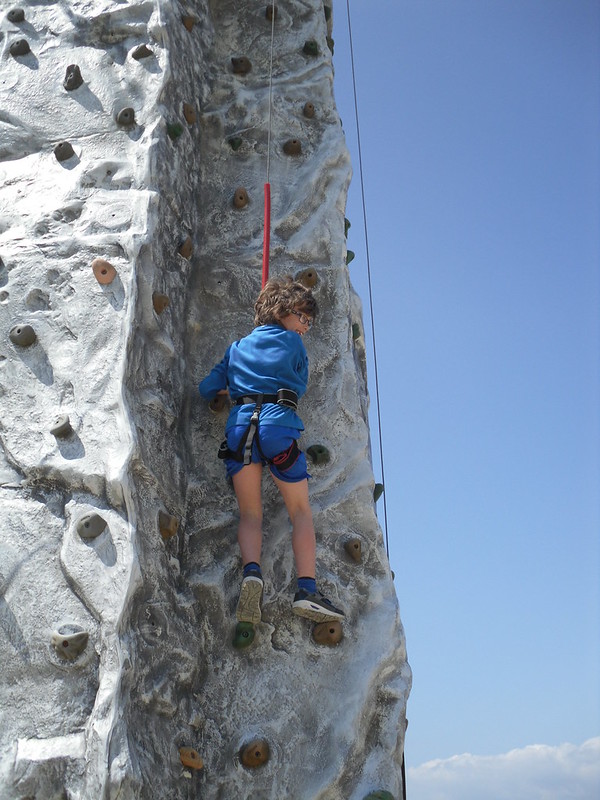