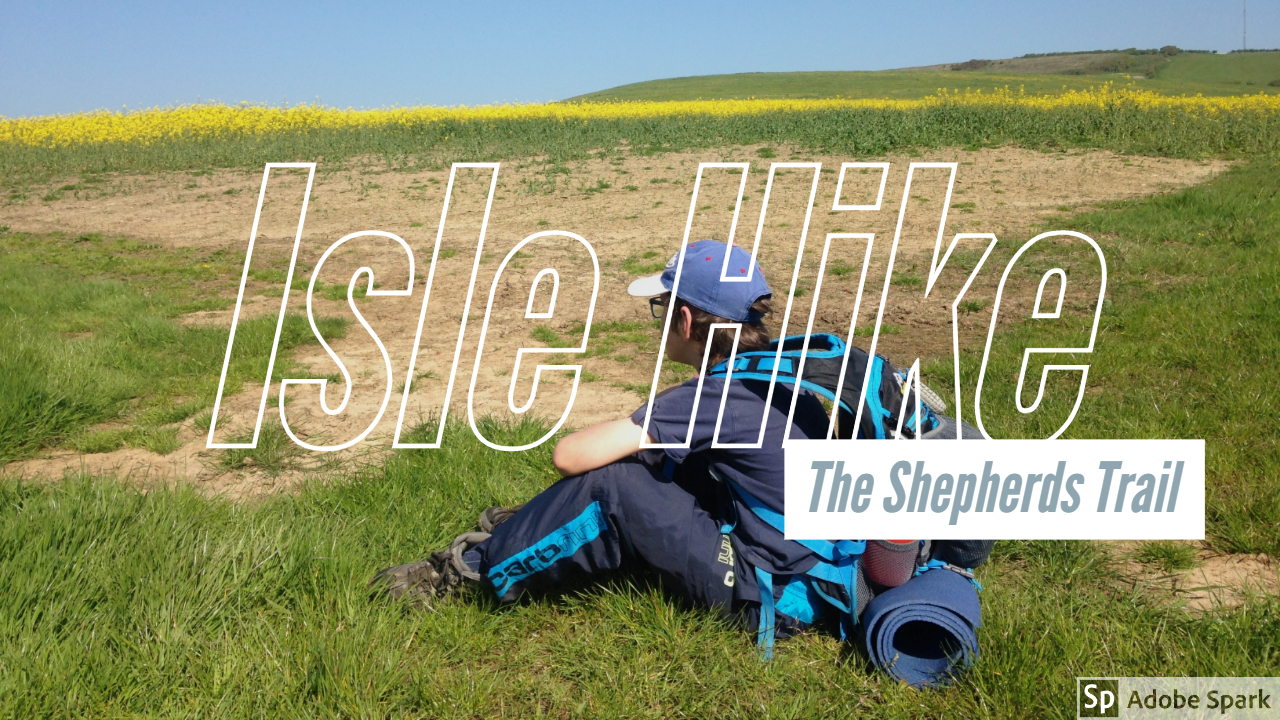 The Shepherds Trail runs from behind the castle at Carisbrooke for 7 miles to the south coast of the Island at Shepherds Chine, which is also the home of our favourite campsite so we decided to hike it on the May Day Holiday weekend.

We live in central Newport so its a good three quarters of a mile up to the trailhead, but as it was also “Comic Book Day” we had to go via the comic shop to pick up some campsite reading for the kids. It was already hot when we passed Carisbrooke Priory and headed onto the trail properly and it had seemed to take an age to get through town, but now we were out in the countryside. 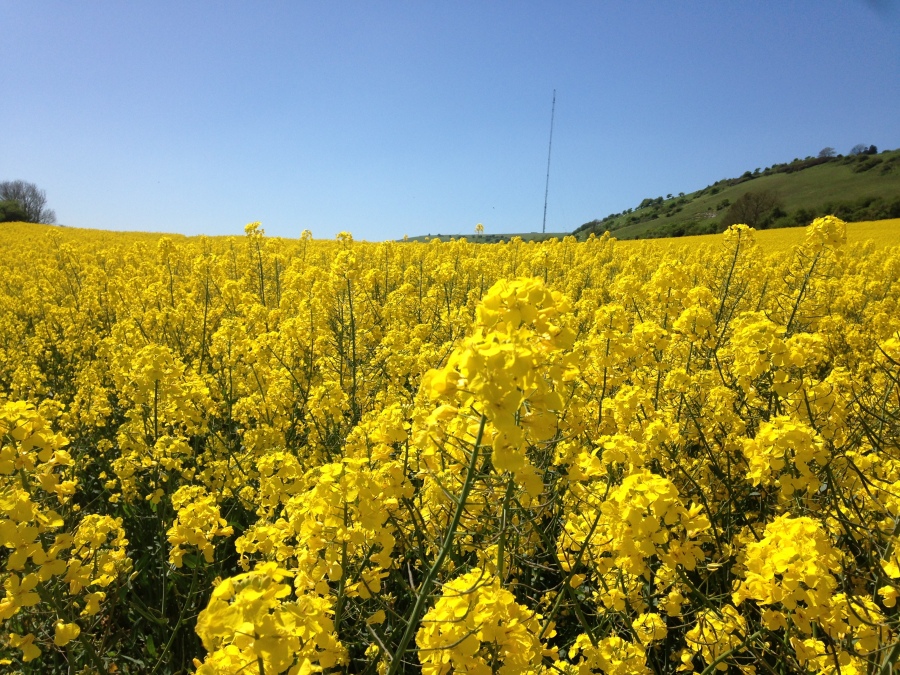 The trail wound its way alongside fields and the occasional patch of woodland and the air was filled the pungent aroma of our sweat (it was baking) and wild garlic which lined the path. The garlic was soon replaced by large fields of oilseed rape and with the sun beating down on it smelled like summers gone by.

We stopped often for drinks and snacks, passed through the villages of Gatcombe and Chillerton and were soon heading into open country where a lack of shade was becoming noticeable. A late lunch was taken in a hamlet I hadn’t known existed called Billingham before we started to climb and were greeted by our first views of the coast. From here we started to descend, through a fairly new mixed woodland plantation, more oilseed rape fields and onto Dungewood Lane where we found cobwebs full of caterpillars in the hedge, some large fungus and a second wind. 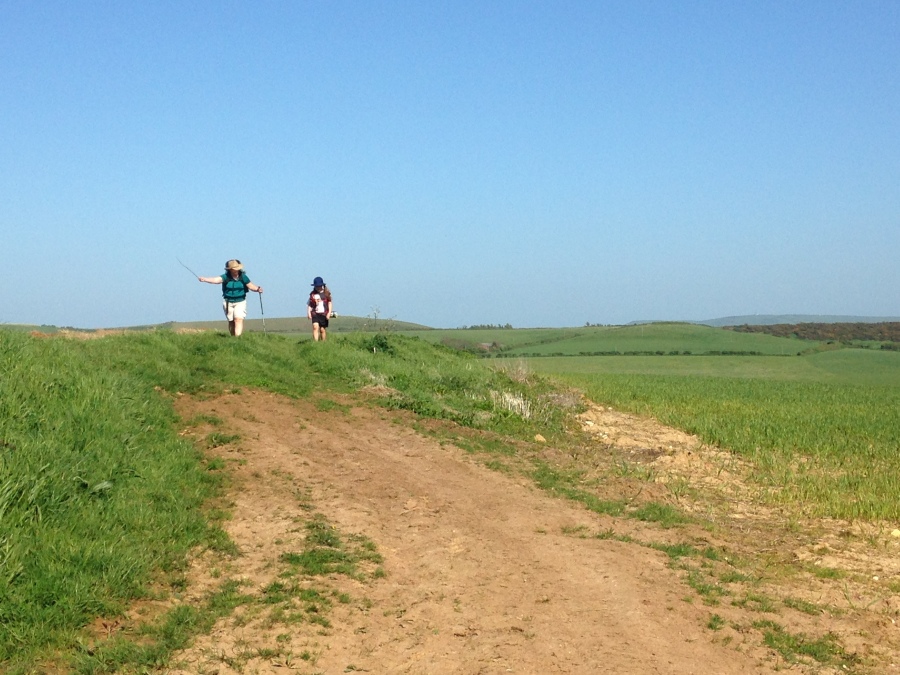 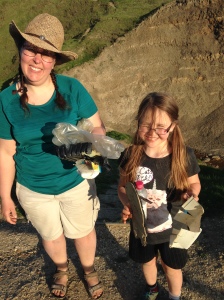 We could see the campsite now so with a renewed vigour and the promise of ice cream we lifted our pace and arrived just before 5 pm only to be greeted by a distinct lack of lollies. It was still early in the season so the campsite freezer hadn’t been stocked.  We found what looked to be a nice quiet spot, pitched up the tent and as an unusual luxury, the tarp as well and then headed down to the beach where we played in the sea, scrambled on some rocks and packed out some plastic.

After a dinner of pasta snacks I got a little fire going in the base of the storm kettle and toasted some marshmallows before turning in for the night. Lil and Mum shared the tent while the boys decided they wanted to spend the night under the tarp with me. I was a little concerned as Isaac hadn’t camped in the tarp before but he was insistent on it being set up, open at each end.

It got quite chilly overnight and Isaac woke up a couple of times saying he was cold but really he had rolled off his sleep mat and his bag had got a little damp. He came and got snuggled in with me rather than go in the tent so he was like a little hot water bottle for me. Evan slept soundly and warm, buried deep in his sleeping bag.

We woke up about 6am, and although I’m usually a very conscientious camper, I didn’t tell the kids to be quiet for our neighbours benefit. After all they didn’t care about sleeping kids when they came back from the beach around 11pm and started playing the worst house music as loud as possible. That was a shame really because we like the campsite because its usually very quiet, even when busy, but next time we’ll probably just find somewhere to wildcamp rather than pay to be woken up by, well, other people. We walked back the way we came and were all thoroughly baked by the time we got home so I nipped to the shops and got the kids a well deserved ice cream. 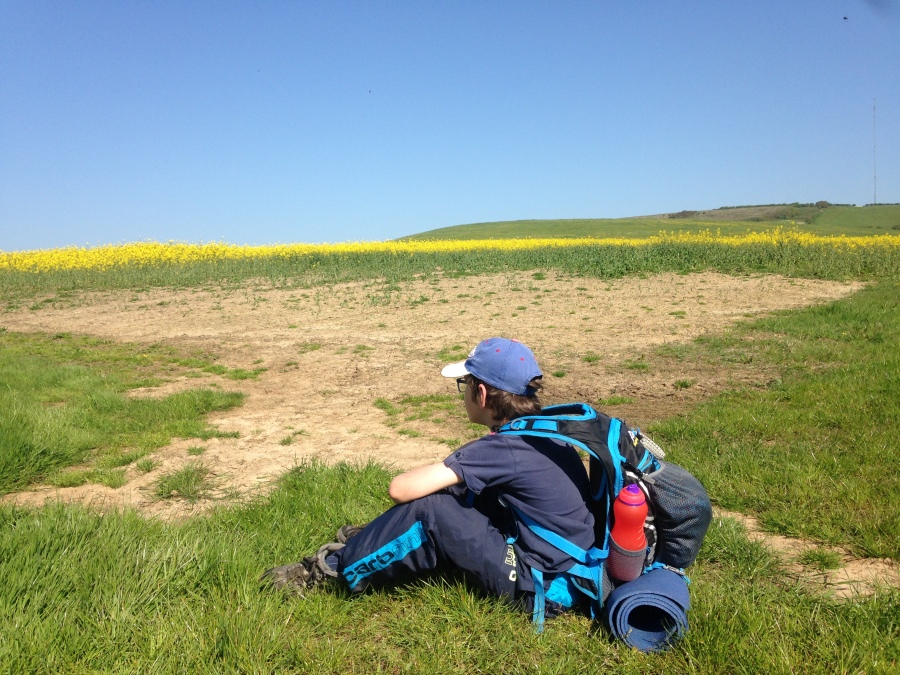 It was a lovely trail, at a perfect time of year.  I reckon it could be quite muddy during winter and early spring, and we didn’t find many additional water sources along the way so we were rationing our water towards the end so later in the summer might see us carrying more water, although there is a little pub in Chillerton if you need more liquid refreshment.