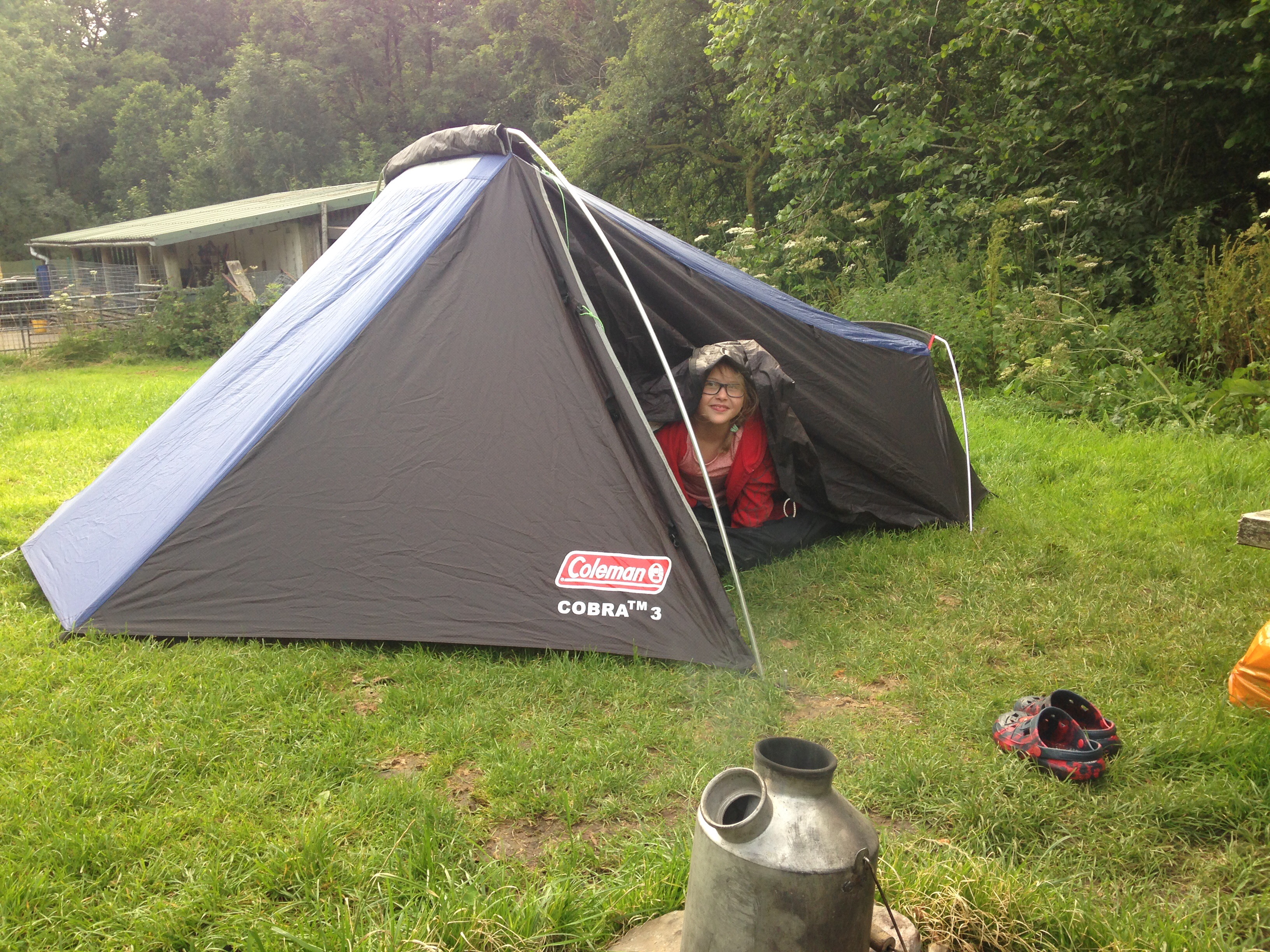 When we started going camping with the children we bought the biggest tent we could afford which turned out to be a 5 – 6 man tent. It had a central “living” area and a bedroom/vestibule on each side. The plan was that we parents would sleep on one side and children on the other. That idea lasted about an hour on our first night. Evan was only just a year old and just cried until he came in with us. In the morning the second bedroom compartment became a play pen of sorts, we zipped up the insect mesh section of the door and in it he stayed while we sorted out day bags and change bags and breakfast. Now when I say he stayed in it……. Yes he worked out the zip pretty quickly and was soon crawling away through a rain soaked field to freedom. We found him about a mile away eating cow dung, we kind of just watched his efforts with the zip and gave him something to eat which slowed him up. A bit.

As more children came along and grew the sleeping arrangements changed as well. A pattern formed as the smallest child would go in with their mother and the bigger ones would sleep on me. (Yes, not with me, on me.) The tent was always big enough but then, we didn’t spend much time in it. So we got a smaller tent.

We now have a 3 man tent which 2 adults and 3 kids can sleep in comfortably. At the time of writing the children are 11, 9 and 7 and this will probably be the last year we all fit in it. When I bought the little tent it was on offer so I ordered two. Once the kids are bigger I expect we’ll use both, one for us and one for kids.

Things did start to change last year. I began carrying one tent in my backpack for cheeky wild camping and we sometimes pitch two tents at a campsite depending on the payment process on site. If its a price per person or per pitch we’ll have both tents up but if they charge per tent or by the size of tent we’ll all pile into one. When we have pitched 2 tents its been one for me and the boys and the second for Hazel and Lillian.

I don’t want to give you an essay about how to choose a tent, a lot of that would come down to your budget or climate or what your individual needs are but I will quickly highlight some of the things we’ve found handy with our tents.

2 Entrances – The chances are that at least one of your party will need to pee at some point in the night so if they can leave the tent without clambering over everyone else thats a bonus. On one occasion our youngest boy woke up, stood in the door of the tent and peed out the doorway. In the morning we exited via the other door.

A good sized porch is great, especially when hiking to store muddy boots and backpacks. Our little tent has one on each side and they give us a little but vital extra space within the main body of the tent.

I like a tent which can be erected in one go e.g the inner tent and the flysheet are attached to each other. I’ve had tents in the past where you erect the inner before putting the flysheet over the top. Not great in the rain.

When backpacking, I can fit the flysheet and inner into a stuff sack much smaller than the one supplied. The poles are carried on the outside of my pack and the pegs in a zipped pocket. This way the tent lives in the bottom compartment of the pack and I don’t need to unpack much to get to it.

Hopefully that’ll help someone out there to choose a perfect tent for them. I suppose the idea is that a tent for the whole family doesn’t need to be a “Family Sized” tent. Also if you know of any 4 man tents, weighing less than 4kg and doesn’t cost the same as a package holiday in Spain, please give me a shout.