Posted on 5 Nov 201818 Dec 2020 by Robert Jones Posted in round the islandTagged backpacking, family adventures, hiking with kids, isle of wight, Long Trails

We got up nice and early with a plan to leave before dawn which didn’t happen. By the time we had a second bowl of porridge and got everything together it was nearly 9 am but hey, we hadn’t confirmed our plan to hike around the Island until only 2 weeks earlier.

I suppose we had always threatened to hike around this little island we call home but the mainland always seemed a little more enticing. Back in the summer we had moved house and the coastal path was only 5 minutes walk away now so it seemed rude not to hike it. Besides, once we’re done we can get back to the exoticism of the UK mainland!

Most of the guides online showed the route going anti-clockwise from a ferry port, I suppose for visitors from across the water, but we would start at Gurnard Beach just down the lane and head clockwise to Ryde and get the worst of the road walking out of the way first. 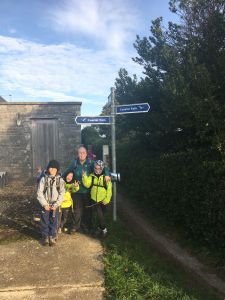 So with laden packs and the sun starting to warm our bones we headed along Gurnard sea front which was nice and quiet, through the sailing mecca of Cowes to our first little “cheat” of the trip, the floating bridge which is the only way to East Cowes other than a 9 mile detour inland along the river.

From East Cowes to Fishbourne was some of the worst hiking I’ve ever done. Either pavement or road, with traffic being all smelly and noisy right next to us and having to cross the busy road multiple times for no apparent reason. So when we reached the path from Fishbourne to Ryde I was both relieved and disheartened at the same time. Great to be away from the road but still hiking on bloody tarmac. Plus, we hadn’t seen the sea since the floating bridge and wasn’t this supposed to be a “Coastal” trail.

We pressed on through Quarr Abbey which was beautiful but busy. We pulled faces at the pigs and the kids enjoyed their first opportunity to run on and just hike like kids. Mind you we were seriously flagging when we reached the soft, soft sanctuary of the beach at Ryde, and coupled with a bag of chips and a can of pop we recharged a little.

We had about half an hour on the beach and with the sun starting to make its rapid descent, we pressed on knowing we still had 4 or 5 miles until we could camp and quietly looking forward to hiking along in the dark. The sunset just as we were heading into Puckpool Park, and as Evan and I were ahead we went through the park. Hazel and the the other two went around and we were separated for a little longer than was comfortable but ultimately were reunited after a couple of forays off trail in search of a toilet.

It was  proper dark now, but with the occasional street lamp and the bright lights of cruise liners on the water and Portsmouth across it, we had a lovely wander through the night. The trail disappeared at one point so we retraced our steps and found an alternate route which was much nicer and led to a night hike along the beach and we only realised we’d missed the trail when we got cliffed out at the far end of the beach. Fortunately someone else came of the trail as we were looking for it so we weren’t delayed for long as we headed into the trees.

We went from a bright, almost full moon on a deserted beach to thick woods, illuminated by a thin corridor of light from our headtorches, stopping at every turn to make sure we hadn’t left the trail and it was here, on the last mile that the tiredness really hit the kids so you can imagine the excitement when we finally broke from the tree cover onto the beach at St Helens and spotted the campsite.

There were a few other campers on the site overstuffed with static caravans (Funny story, Hazel and I lived in a caravan on this site when we first lived together, long before the kids were around) but there was plenty of room for our little blue tent. We got the beds set up and found out we needed a code for the toilet block. I was going to pay in the morning so I was hoping someone might be around. There was and while he did give me the code for the washroom, he also made me pay there and then. A grand total of £6. I was the happiest hiker ever, we normally have to pay £25 for a night at a campsite so that was a result.

The kids were tucked up with their kindles when I got back and it seemed a shame to turf them out into the cold to use the facilities, but we did and it wasn’t long after that they were snoring.

The night hiking was great and even the walk through the dark, dark woods was alright especially compared to the rest of the day. We had hiked 17 1/2 miles, our longest ever day as a family, and I would guess 16 of it was on tarmac, and 13 of it along roads and nowhere near the sea. Not being funny, I would never, ever, ever repeat this section. Fellow hikers, if your doing this trail, start/finish at Ryde. Do not bother with Ryde to East Cowes, I can think of ZERO redeeming features and we only did it to be completist. Its not even worth that.